Tutors are free and online appointments can be made via the Starfish Tutoring Center.

This assignment can either be completed individually or with a partner of your choice. Be sure to review our Code of Conduct for pair programming and be careful to adhere to it when working on the assignment as a group. Keep in mind that you both must be authors of all code submitted.

One of the most powerful applications of computer programming is the automation of statistical analysis. In particular, computer programs are used to process large quantities of data, summarize it, and visualize it so that the implications of the data can be understood. In this assignment, you will process and analyze a dataset and report any conclusions that can be extracted from it. 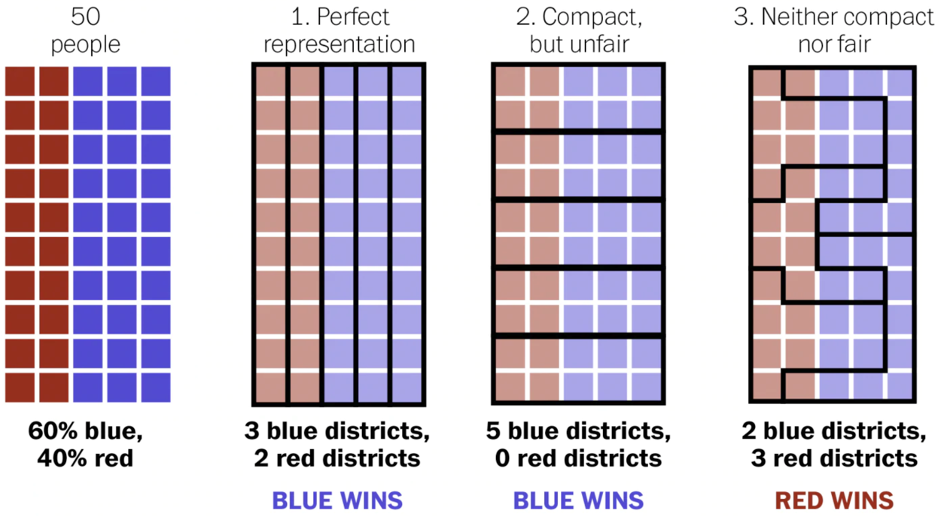 For more information on gerrymandering, you can take a look at the following resources:

In this assignment, you will process and examine the election data yourself and come to your own conclusion about the effects of gerrymandering in these elections.

The dataset you will explore are the results of the 2018 US House of Representatives elections. The dataset was collected and published by the MIT Election Data and Science Lab and is publicly available on their Github page.

Start by downloading the CSV of the dataset below:

Create a file named gerrymandering.py and place the district_overall_2018.csv dataset and your gerrymandering.py file in the same folder. This will make the dataset easier to open and process during the assignment.

Be sure to examine the dataset carefully in Microsoft Excel or in your preferred spreadsheet viewer. Keep in mind that the first row of the CSV file is a header row and specifies what datum each column of the spreadsheet contains. The columns of particular interest to us are the state, the district, the party, and the candidate votes columns.

In your gerrymandering.py file, write a function called parse_csv(filename) that takes the name of a file as a parameter and returns the dataset as a list. In particular, parse_csv should return a list of rows where each row is itself a list a strings. Each row list should have one element for each column of the CSV file. The parse_csv function should also skip the header row.

Below is an example of running this function on the district_overall_2018.csv dataset.

Here are a few tips on implementing this function:

Once you have parse_csv implemented, it is easy to parse the dataset into a list of lists. However, you’ll notice that it is now confusing to fetch columns from a row because you must access an element from a list by its index.

In your gerrymandering.py file, write four access functions named get_state(row), get_party(row), get_votes(row), and get_district(row). Each of these functions should take a list as a parameter representing a row from the table and return the corresponding column. Below is an example use of the functions:

NOTE: Tthe get_votes function should return the candidate votes column, and should convert it into an integer since it is numerical.

To properly analyze the dataset, we will need to be able to appropriately filter the rows based on their state and their party affiliation.

NOTE: These filtering functions should return a new list of rows. Do not mutate the list table given as a parameter.

Below are example executions of these functions.

To help us process the data efficiently, we will need a way to quickly look up the election results for each district. In your gerrymandering.py file, write a function called group_by_district(table) that takes the table of data as a parameter and returns a dictionary that maps districts to rows of table. In particular, the dictionary returned should have one key for each district, and each key’s associated value should be the list of rows in table matching that district.

Here are a few tips on implementing this function:

Since we eventually want to quantitatively compare and contrast state and party voting results, we need functions that reduce the data into something we can reason about.

In this part, you will write four additional functions and place them in your gerrymandering.py file. The first two functions are:

HINT: get_percent_votes can be implemented without using a for-loop by reusing your previously defined functions filter_by_party and get_total_votes.

Here is an example of using the above two functions:

The other two reduction functions you need to implement are:

Here is an example of using the above two functions:

Finally, we have what we need to analyze any discrepancy between number of votes and number of seats in state elections.

Write a main function in your gerrymandering.py file that asks the user to type in the name of a state and the name of a party and then prints off a summary of the total number of votes the party received and the number of districts won by that party.

When I “run” your gerrymandering.py file, it should produce output like the following:

Here is another example of running your code:

Ultimately, algorithms can only process a dataset and produce numbers; it is up to us to verify that the numbers are correct and interpret their meaning. In this last part, your task is to interpret the results of your analysis for three states: Florida, Wisconsin, and Minnesota. The question you are to consider is whether your analysis supports claims of gerrymandering in those states. You may find it helpful to review this Youtube video and the FiveThirtyEight article on gerrymandering.

In comments at the top of gerrymandering.py, write two paragraphs answering this question. Your answer should include both numerical results from your analysis as well as comparisons between those three states and others. If your answer is that your results don’t clearly support any conclusion about the presence of gerrymandering, that’s perfectly fine—just make sure to support your argument. I’m not looking for an in-depth essay here, just a demonstration that you’ve taken the important step in data analysis of engaging with the issue you are analyzing.

How to Turn in Your Code

I will evaluate your work with the following criteria in mind.

This assignment was inspired by one written by Aaron Bauer at Carleton College.